“For now I am in a holiday humour.”

William Shakespeare, As You Like It, Act IV, Scene 1.

Mention the words ‘Clifton Beach’ virtually anywhere in the world and people get a dreamy look in their eyes. This look can be occasioned by thoughts of Clifton’s splendour, its beauty, its views or the cost of buying a property there. Known as the most expensive real estate in the country, ownership is reserved for those with more than a few spare bucks lying around, or those who can convert a stack of dollars, pounds or euros into our tenuous currency. Given that once upon a time the wooden shacks that graced its cliffs were residences for Italian road workers, Clifton has certainly seen a change in fortunes over the past eight decades or so. The wooden shacks that survived have been upgraded somewhat, and the rest have been replaced by ever-more opulent buildings and condominiums clinging to the face of the landscape. A parking space in Clifton will set you back more than a better-than-average house in most of the other suburbs – something to think about if you are thinking of joining the select few who own property in this section of heaven on earth.

We have written before about Clifton, so won’t go too much into the history, other than to remind readers that the four beaches that make up the whole known as ‘Clifton’ were originally known as Skoenmaker’s Gat (or Cobbler’s Cave), after a ship’s deserter who lived there, and presumably cobbled shoes when he could drag his eyes away the view. As I recall, we also mused over the thought that he should have fenced the area off and claimed it as his own. His descendants in the 21st century (assuming they held on the land) would now make Bill Gates look like a pauper. The bay has also seen tragedy, with the slave ship São José Paquete Africa running aground there in 1794 with over 200 slaves drowning in the sinking. It’s a sobering thought that slavery was still a rampant – and highly profitable – enterprise as little as 150 years ago. The effects are still shuddering our society to this day, and will probably continue to do so for centuries to come. Memories, it seems, don’t die with generations, and given the magnitude of horrors caused by slavery, this is no surprise. Hopefully mankind lives and learns, but we aren’t too sure about that.

One of Clifton’s most startling assets is the sugar-white sands that cover the scalloped bays. These are grains of granite, the rock underlying the more visible Cape sandstone that comprises the cliffs of the Twelve Apostles, the mountain range that stretches behind the coastline. Check out last week’s blog for more on this; it’s also further proof of the many million of years that have elapsed during the formation of the landscape to what we view today. The large boulders that intersect the four beaches are also granite, and if you take a close look at these monoliths you’ll note that they are rather solid. To have been ground down by the action of sea, sun, wind and rain into the hectares of beach sand that exist on Clifton Beach was not something that happened to rocks during the time of man on this planet.

Millions of years have elapsed since the bay formed, but we reckon the result is worth the time invested. Clifton’s other big drawcard in summer (ignoring the hundreds of scantily clad, beautiful people who populate the sands) is the fact that Clifton is sheltered from the predominantly south-east winds (and gales) of summer. Add this all together and you have a Blue Flag Beach of note; one that Capetonians are supremely proud of, even if they can’t afford to live there.

Which all leads to Waterfront Charters, of course. Why have an incredible asset if you don’t make full use of it? We do; and how we do! Those of you who have traipsed down the stairs to one of Clifton’s Beaches will have looked out at the luxurious yachts anchored in the bay, and you wouldn’t be human if a few envious thoughts didn’t creep across your consciousness; no searching for parking or space on the beach; chilled drinks; shade when you need it; music to suit your mood; a gas braai to grill your favourite grub; like-minded companions all soaking up the atmosphere…wait a minute! That’s exactly what we are offering! Ten cruises this summer aboard Enigma, our state of the art motor powered catamaran; three full hours of bliss aboard this luxurious yacht. No parking issues – you board at the V&A Waterfront. Limited to 40 guests per trip, you’ll be able to party or chill, whatever mood takes you. Imagine sipping a deliciously iced cocktail as you look across the Bay at the beach-based throngs; a top DJ supplying sounds, the blue of the Atlantic lapping at the twin hulls. You can swim, dance, lie back and listen, or try your hand at stand-up paddling: the delicious aroma of grilling grub from the gas-fired barbeque ensuring your taste buds are ready…

Eleven cruises, forty people per cruise – you do the maths, and then check out the dates on the website and book your perfect adventure. You don’t have to be a billionaire to party like one with Waterfront Charters: we love our guests and want to make sure they return time and again to indulge themselves at one of Cape Town’s most iconic venues aboard one of Cape Town’s most prestigious cruise company’s boats. 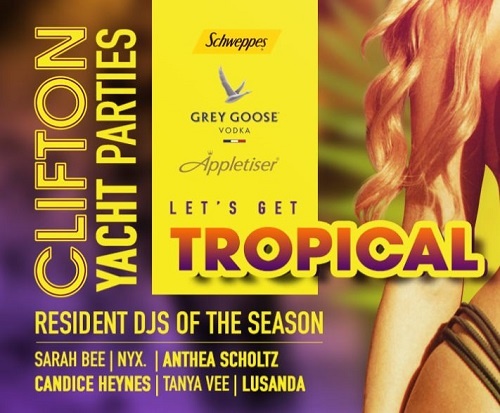