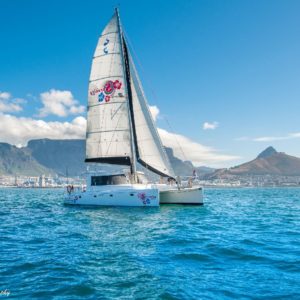 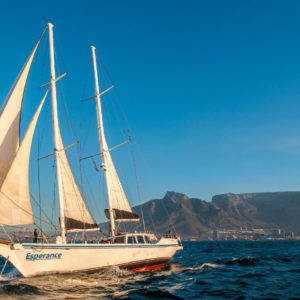 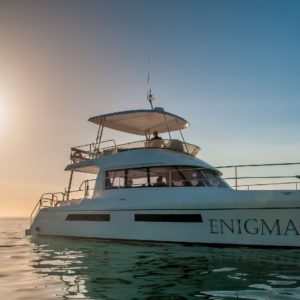 Have you ever had the pleasure of sailing aboard a Kattumaram? At Waterfront Charters we have three of these wonderful boats and swear by their efficiency, safety and grace.

You don’t have to be a genius to work out that ‘kattumaram’ is the originating word for ‘catamaran’, but you’d be in a much smaller group of individuals if you knew that ‘kattumaram’ is the Tamil word meaning ‘logs tied together’. It’s not too much of a stretch to fast forward mentally from thoughts of two tethered logs floating down a stream to the broad-based twin-hulled vessels that we now know as ‘catamarans’, or to the greybeards at yacht clubs simply ‘cats’.

Despite their Tamil (South India) nomenclature, catamarans actually date back to Polynesian roots, developed in the Pacific waters some 3500 years ago. Initially based on outrigger canoes (canoes with an additional float on one or both sides), eventually, each hull became equal in size and load-carrying capacity. An English privateer (alright, pirate) William Dampier saw these boats during a circumnavigation of the world in the 17th century, and he brought them to the attention of the First World in his 1697 journal ‘A New Voyage Around the World.’ Only in the 19th Century did the idea take off in Europe, but since then catamarans have been an essential marque in the sailing world, supporting everything from racing hulls to huge ferries.

Why two hulls? Firstly, they are more stable a being based on a wider platform than the classic monohull. As they don’t need a keel, they can also operate in much shallower waters. Secondly, the twin hulls of a catamaran experience less resistance to water than a monohull, which makes them more efficient – both under sail and power. In fact, a catamaran requires four times power to double its speed, whereas a monohull requires eight times as much power.

Waterfront Charters three luxury catamarans are descended from the great catamarans of times past, and they certainly grace the V&A Waterfront with their presence. Their wide bases make them ideal as cruise vessels, and they are perfect party platforms. As you would expect from the top Cape Town cruise company, each vessel has its own characteristics, and as such we can cater for every event from a romantic evening’s cruise for a loving couple to a corporate launch for 140 cheerful souls.

Enigma, our newest vessel, is a powered cat that loves the ocean; Serenity One is our beautiful sailing cat who loves the breezes. Sea Princess is the matriarch of our family, a powered double-decker cat that can easily handle the bigger parties that take to the Atlantic to celebrate.

Whether it’s a gentle recreational cruise you are looking for, r the ideal venue for a Big Bash, Waterfront Cats are up to the task.

Africa’s wildlife is known for the Big Five, which only contains two cats, the lion and the leopard. Waterfront Charters have the Big Seven, with no less than three cats. Come and check them out!